Have a look at the rich, diverse faculty here at Transformational Storytelling! 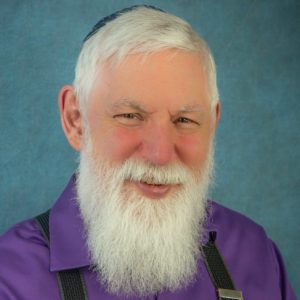 Maggid Jim Brulé is a storyteller, teacher, coach, and organizational consultant whose experience spans several decades. As a maggid, he creates opportunities for spiritual growth and transformation through encounters with stories, whether in performances, classes, or individual guidance. He also serves as an interfaith chaplain in hospitals, jails, and psychiatric facilities, and is active as a “death doula.”

Jim serves on the boards of Northeast Storytelling and Artists Standing Strong Together (ASST), and has delivered programs to storytelling organizations around the world. He teaches digital storytelling at the university level, and has crafted training programs in leadership, collaboration, and issues of implicit bias for commercial, non-profit, and religious institutions.

He holds advanced degrees in counseling psychology and computer science (artificial intelligence), and has published books and articles in several fields.

He received s’micha as a maggid from Maggid Yitzhak Buxbaum in  2009, and has been operating the Transformational Storytelling program since 2017. 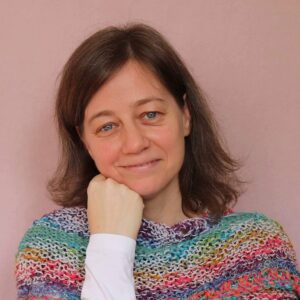 Maja Bumberák is a renowned storyteller, singer, and educator based in Budapest, Hungary. She tours the world, sharing stories and songs from Hungarian folklore and other cultures, in Hungarian and English. She also applies and leads does story work in various group processes, where self-awareness and the community- and bridge-building role of stories is emphasized. As a scholarship holder of the Hungarian Academy of Arts, she researches the oral tradition of Hungarian storytelling and conducts training in oral storytelling for teachers, student teachers, and other professionals. She believes stories can heal a community in a way nothing else can. You can learn more here: https://majamesel.wordpress.com/blog/

Maja is a partner with Maggid Jim in designing and delivering the school’s curriculum, and bringing knowledge on stories from traditional Hungarian oral folklore and their cultural background. Additionally, she provides coaching, gives constructive feedback to students’ storytelling during class, and co-facilitates all retreats. 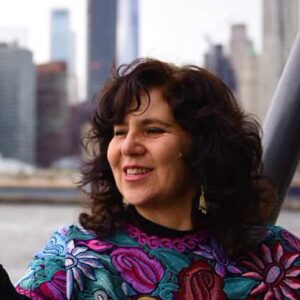 Valentina Ortiz, currently based in Mexico, is a storyteller, musician, writer, recording artist, teacher, and humanitarian. She considers herself a citizen of the world, as she tells her stories in English, Spanish or French. Valentina is the magic of Mexican traditions, with their music, native languages, and stories. She also embodies the flavors of the Caribbean drums; she is the union of the different cultures from the tropics to the mountains. She speaks words of hope, of song and music, of strong women, of responsibility towards Mother Nature and community. 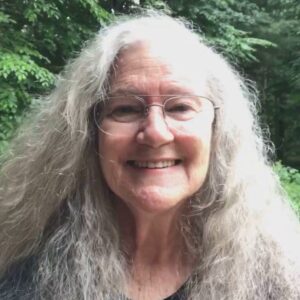 Hears Crow: Nootauau Kaukontuoh, “she hears the crow,” is a woman of the Eastern Woodlands. She lives her life in the tradition of the Nanhigganêuck, the people known today as the Narragansett. She is a Storyteller of Longhouse Tales, told in many different ways including Native Sign Language, call and response, as well as other traditional styles. As a ‘kuhkootomwehteâen‘ (one who shares knowledge) with thirty-five plus years of telling in these different styles, she brings forth the culture of the Longhouse People through their stories.

On occasion, a visiting faculty member may present yet another perspective on the power of transformational storytelling. Each of them makes use of story in unique ways to spark spiritual growth. 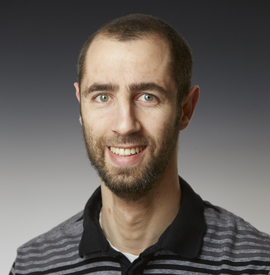 Elliott Bazzano is an Assistant Professor in the Department of Religious Studies at Le Moyne College, where he teaches courses on Islam and comparative religion. Storytelling, case-studies, and media analysis are particularly important elements of his pedagogy. He also remains committed to interfaith work both inside and outside the classroom, writes for the Wabash Center blog “Teaching Islam,” and hosts podcasts for New Books in Islamic Studies. His publications on Ibn Taymiyya, Qur’anic studies, and approaches to the study of religion can be found in peer-reviewed journals and edited volumes, including The Journal for the American Academy of Religion, Religion Compass, Teaching Theology and Religion, and The Bloomsbury Companion to Islamic Studies. For a more detailed profile, see his faculty web page here. 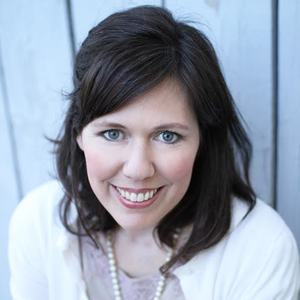 Jenifer Moss graduated from Brigham Young University with a degree in Child Development and Family Science, but her greatest education and deepest joy has come from learning to raise her eight children. Married for 20 years, Jenifer currently lives with her family on a little farm in Upstate New York. She spends her days as a full-time mother and spends her free time working with her local Tully School PTO, the Red Cross, InterFaith Works of Syracuse, El-Hindi Center for Dialogue, Hope for Accreta Foundation, and as a Sunday School teacher for The Church of Jesus Christ of Latter-day Saints. Jenifer was awarded the 2016 New York Mother of the Year from American Mothers. She currently serves on the American Mothers National Board. She is grateful to find joy in small moments and to live her happily ever after. 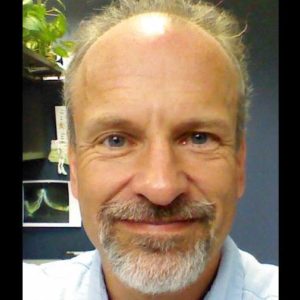 Kurt Hohmann has been telling and writing stories for most of his life! His endeavors in the Syracuse area includes service as an officer in the Pagan Church of the Greenwood, coordination of the Pagan Pride Festival, assistant Pagan Chaplain at Syracuse University, and Goði (priest) for his Asatru spiritual group. The latter provides ample opportunity for spiritual storytelling, as most of the values and lessons in that path are taught through a rich trove of often epic prose and poetry. Kurt is also pursuing a course of study in Germanic/Scandinavian lore, as well as a graduate level seminary degree. His current professional career is also steeped in story: he often takes the raw facts provided by engineers and converts them to stories for customers to understand. Read more of his scribblings at http://www.kurthohmann.com/ 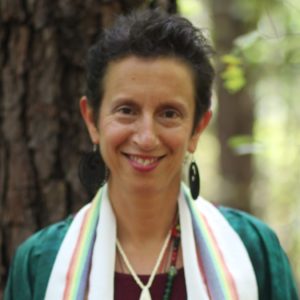 Rinah Rachel Galper is an ordained Kohenet (Hebrew Priestess) and Maggidah (Jewish Spiritual Guide and Storyteller) as well as a licensed special education teacher living and working in Durham, NC. She is the co-founder of Sacred Monsters, a creative, progressive Jewish worship community, and Our Sacred Circles (OSC). OSC houses Rinah’s life cycle celebrations, healing rituals, spiritual support, and visioning work, in addition to women’s gatherings and training and the Women’s Wisdom Project. She has spent over a decade leading multi-faith sharing circles, peace vigils, alternative Jewish holiday celebrations, art-based workshops and magic and nature camps for children. For more information and to contact Rinah Rachel, please visit oursacredcircles.com or email her at oursacredcircles@gmail.com 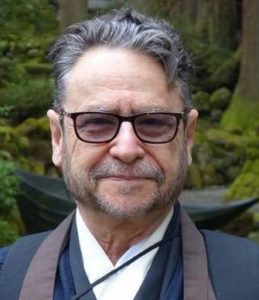 Rafe is the author of over 20 books that have been translated into many languages including Swedish, French, Xhosa, Zulu, Afrikaans, Korean, Japanese and Portuguese. Speaking as both an author and a storyteller, Rafe has appeared in thousands of schools, libraries, festivals, and conferences in nearly every state—including Alaska and Hawaii—and as far away as Japan.

For over forty years, Rafe has been investigating, working with and writing about the ancient, traditional Buddhist teachings expressed in the Jataka Tales. Among the many prestigious festivals, conferences, and institutions at which he has been featured are The National Storytelling Festival; The Joseph Campbell Foundation Festival of Myth, Folklore, and Story; and The P.E.N. American Literary Center, to name just a few. 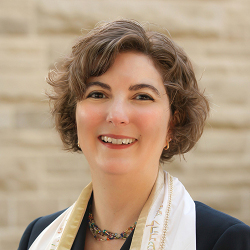 Cantor Kari Siegel Eglash serves as both cantor and director of education for Temple Concord in Syracuse NY. Originally from Milwaukee, WI, she was ordained in 2001 from Debbie Friedman School of Sacred Music at the Hebrew Union College – Jewish Institute of Religion.

Cantor Eglash’s journey to the cantorate took her from Beloit College, where she earned her BA in history, to Tata, Hungary, where she taught English to high-school students, to five years in the business world of investment and finance. Through all of these experiences her, love of Judaism, history, teaching, history, and music remained strong and led her to her true calling—the life of a cantor. 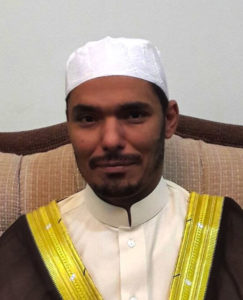 Imam ElFiki is a graduate of the prestigious Al-Azhar University in Cairo with a 5-year Bachelor’s degree from the Department of “Islamic Studies in English” in 1999. Prior to his degree, he spent 7 years at Al -Azhar educational institutions. He memorized the Quran when he was 15-years old. After graduation, Imam ElFiki worked as a lecturer at Misr International University, a teacher at an Islamic school and was a business development director for an Educational institute. His last job was a director of “Curriculum and Assessment” unit at an Education Systems company. 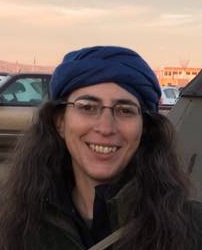 RavMaggus Amashé Etz Alon was ordained by Rabbi Gershon Winkler, she also has two separate s’michot (ordinations) as a maggidic practitioner, and has spent her life immersed in the ancient Earth-based Hebrew wisdom paths. Her specialty is bringing the wisdom of Halacha, Mussar, and Kabbalah alive, making the essence of the Hebrew Soul relevant and accessible to both the layperson and professional Jew alike.

Bridging the full spectrum of Hebrew expression from shamanic Hebraism, through rabbinic Judaism, and into new paradigm consciousness, her teachings and workshops are noted for being intellectually challenging, mystically stimulating, and solidly rooted in Earth-Based Torah. Alternately traveling through communities around the world and spending deep periods of isolation in the wilderness, she currently lives in Ashland, Oregon. 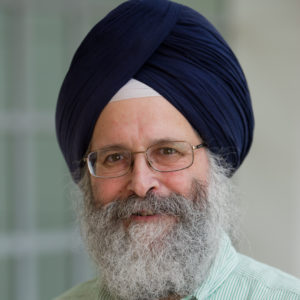 Ralph currently consults to develop curricula and resources to bring an understanding of shared values into schools using the teachings and wisdom stories from the world’s spiritual traditions and cultures. His latest project, “Stories to Light our Way, Journey to the World of Good” is an award winning, professionally produced audio CD with stories from eleven different traditions with accompanying teachers’ guide and lesson plans integrated into CCS.

For over 40 years, Ralph has focused on spirituality and values in education and in public life. He helped develop the “Schools of Character” project for the Central N.Y. Education Consortium, He developed and taught “Exploring Spirituality,” served on the National Council of UNA-USA under Fmr. U.S. Atty General Elliot Richardson’s leadership, and on the advisory board of the Maxwell School of Citizenship and Public Affairs’ Program on Analysis and Resolution of Conflict.