This powerful and highly interactive workshop will inspire your engagement with “the other.”

After laying foundational instruction – and a story or two! – you will engage in an exercise designed to evoke a strong, empathic response to being “outside,” ultimately invoking motivation to action. Dialogue and collaboration are used throughout; full advantage is made of the power of small groups and immersive creativity.

Come prepared for meaningful interactions and insights. All you need is a little paper, a pen or pencil, and an open heart.

How Titi and I met to begin our project is quite the story. It makes it seem to each of us as if there was a bit of Destiny at work…

I had decided that the best way to promote my storytelling school would be through a podcast. My format was to invite an accomplished storyteller to tell a story, be interviewed by me, tell my own story, and then comment. (The podcast, Storytelling Matters, lasted a year and is currently on long-term hold).

In order to do this, I needed transcriptions of my interviews, as I edit them carefully. So I headed over to fiverr to find a good, affordable transcriptionist. Fate sent me to Titi.

After completing several transcriptions, she reached out to me directly. “These stories are wonderful! They remind me of my grandmother’s stories and how she told them; it’s so sad that they’re being lost…”

Of course, you couldn’t have said anything more enticing to me. I suggested that she tell them herself; she demurred, saying she wasn’t a storyteller. I encouraged her, and had her send me a recording of her trying a story. She did so, and I knew I had encountered a gifted storyteller “in the rough.”

I hired her to tell some stories for the podcast, and offered to take her on as a student. She was thrilled – she had wanted to be a storyteller! I asked her about her dreams, and she said to gather stories from Yoruba and share them with families here and in her own country.

And so the Yoruba Project was born…

“Star Woman” is a sacred story.

The Kalahari have a story about a Star Woman. It was first recorded in English by Laurens van der Post, an Afrikaner of some renown. It became known to me via three independent routes: a beginning storyteller who had heard it from a well-respected storyteller, and two other accomplished storytellers, each with roots in South Africa.

The story is moving and full of rich symbolism. For one of the storytellers who shared it with me, it continues to serve as a pivot point that helps her better understand her life and the lives of those around her.

And yet, I believe it should not be told. At a minimum, I will not tell it. Why?

The Star Woman is a sacred story. And it seems van der Post likely did not have permission to share it. (To be clear, I don’t know for certain, but there is good reason to doubt that he did).

Those outside the storytelling world may ask, “So what?” It is, after all, a beautiful and compelling story, and who is harmed if it’s retold?

In the world of sacred storytelling, we quickly learn that stories have a special power to transform. For many older cultures, this power is tightly interwoven with the people and culture themselves. Telling a story without the permission of its “owner” – in this case, the culture – is like ripping a limb from a living being because you like the way it looks. The being is sorely injured, the limb withers and dies, and everyone loses.

Many of these cultures – such as the Kalahari, or the many of the First Nations in the western hemisphere – will not tell stories if outsiders are present, and explicitly ban their retelling.

Other cultures, however, are ready to share their stories. Even when they are, though, it’s critical to appreciate the deeper spiritual source from which they spring.

Want to learn how to tell sacred stories? Learn more about my Transformational Storytelling program – the next term begins in September, 2019!

There are many places where stories in the Midrash, the collection of attempts to explain parts of Torah which are unclear, confusing, or simply pregnant with meaning, overlap with verses in the Qu’ran, the holy scripture of Islam. How these close correspondences came to be is intriguing, but not relevant here.

For example, there is a famous Midrash which recounts the young Abraham (known as Abram as a child) destroys the idols that his father, Terach, has made and taken to the marketplace as his trade. Young Abram smashes all but one with a large stick, which he then places in the hand of the one idol he did not smash. When his father confronts him, Abram blames the remaining idol, saying it broke the others out of anger. His father rebukes him: doesn’t he know that clay statues can’t do anything? Then why do you worship them, Abram retorts, and the lesson is delivered.

In the Qu’ran, the story is nearly identical, except that Ibrahim chastises an entire group that happens to include his father, and the idols are not his father’s – they are simply arrayed in some unspecified location. These seem like minor differences – but are they?

Each story attempts to demonstrate the wisdom of Abraham/Ibrahim at a very early age, as well as his urge to combat idol worship and draw people to worshiping the one God. However, in the Midrash Abraham confronts his father directly, whereas in the Qu’ran he teaches a crowd.

In deeper stories, the father character can be seen as a stand-in for God, and it helps to parse the deeper meanings with that understanding. In Judaism, the core value is to wrestle with God (the literal meaning of Israel); in Islam, it is to submit to God (the literal meaning of Islam). And so, in Midrash Abraham directly confronts God, whereas in the Qu’ran he draws the public to the truth, but never confronts his father directly.

A deeper reading of these two texts will reveal even deeper understandings of the two religions, but they cannot be fully understood until the texts are read . In other words, we need to see the differences between them in order to understand them – simply viewing the world from one perspective is woefully inadequate.

Like to learn more? Join my main class when the next term begins in August, or watch for a short course. Just be sure you subscribe to this blog! 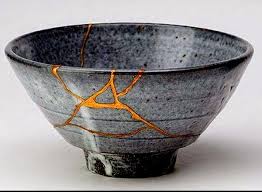 When a piece of pottery breaks, there is a Japanese practice known as “Kintsugi” which repairs the breaks using a precious metal – usually gold, but also silver or platinum. Kintsugi refers to far more than just highlighting the crack or flaw, however; it carries a much deeper meaning.

This practice recognizes that the cracks or breaks reveal a deeper character and history of the article, and so are not “repaired” with precious metals merely for their appearance, but to highlight and give honor to the distinctive quality of the pottery.

And so it should be with each of us: when we witness the distinctiveness of another – even in their brokenness – we should recognize and honor the beauty that is revealed. That, it turns out, is the other meaning of “Tikkun” – to adorn or embellish. Thus, we are enjoined not simply to repair the world, but adorn the souls within it! 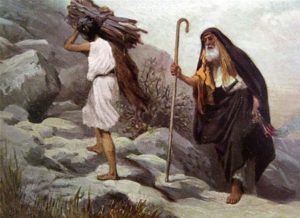